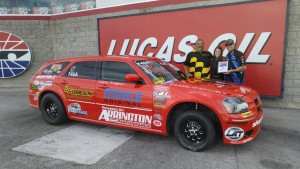 Liquid Glow Co-Founder ALEX “THE CAR GIRL” ROGEO MOVES FROM 8TH TO 3RD IN POINTS WITH RUNNER UP IN PSCA RACE IN LAS VEGAS
Las Vegas, NV – Alex Rogeo raced her Liquid Glow MAHLE Arrington Dodge Magnum to runner up in the Premier Street Car Association Magnafuel West Coast Shootout presented by Mickey Thompson Tires at The Strip at Las Vegas Motor Speedway on Sunday. In going five rounds to the final, Alex took advantage of some good fortune to move from eighth place to third in the Bracket-1 championship points race with one event remaining.

“It was a great weekend, so rewarding to be in another final, and I have so much to be thankful for,” said Alex. “We had struggled with some issues with the car earlier this summer. My partners FTI Converters, Westminster Performance Transmission, Arrington Performance, Magnuson Superchargers and Mickey Thompson worked with us, and especially my crew chief Richard [Kratz] to solve the issues and give me a race car this weekend that was the most consistent car I’ve been able to drive for a quite a while. And on Friday we weren’t even sure we were going to be able to race.” Alex made one pass in practice on Friday and the car broke its supercharger belt, a problem which cropped up in testing in August.

“We contacted Daniel at Arrington late on Friday night,” said Alex. “Daniel suggested that the problem was in our power steering pump mounting. So we shimmed the pump forward early on Saturday morning in time for the first qualifying round. The belt was fine for the rest of the weekend, so we are incredibly grateful to Arrington and Daniel.”

Alex’s crew chief, MoparMax magazine editor-publisher and Liquid Glow Co-Founder Richard Kratz, talked about the changes made to the car since having had to drop out of the inaugural FigSpeed West Coast classic race in June. “We took the car to Westminster Performance Transmission [in Westminster, California] and they looked at the data logs and thought we had a slipping torque converter sprag. So we sent the converter back to FTI Performance in DeLand, Florida and they rebuilt the converter with their newest sprag design. We also saw some strange manifold pressure traces in the logs, so we went to Magnuson Superchargers where they decided it was time to freshen our blower. They also gave us some ideas on things we could play with in the boost bypass setup to help tune the car’s launch to track conditions. Finally, we put new Weld Racing Black Draglite wheels all around and switched to a smaller wheel up front. These wheels allowed us to put some smaller Mickey Thompson Tires up front and we shaved a total of 44 pounds off the nose of the car.”

It all came together by race day on Sunday and Alex had a very consistent race car when it counted. On the way to the final, the team faced tough opponents every round. Alex said, “I think my lucky round was against David Albers, the defending Bracket-1 champion. His altered uncharacteristically slowed and wasn’t able to run the number. Next up was an excellent Vegas racer, Jason Dawson with his dragster. Getting past him was tough, only to find we were paired with Jeremy Rapp. Jeremy and his dragster are usually the ones who make it to the late rounds and like with Jason, you have to really be on your game to have a chance at a win. That round was so close that I wasn’t sure who had won until the win light came on in my lane, and it was a win by only six thousandths of a second.”

In the final round, Alex faced Mel Uechi and his top sportsman, 177 mph doorslammer. “I left three seconds earlier than Mel and the closing speed difference was more than 50 MPH,” said Alex. “It’s hard to judge with that much speed difference, but I saw at the very end that he wasn’t going to make it and slowed the car down. I just didn’t slow it down quite soon enough and I broke out and Mel took the win. It was a great final round and congratulations to Mel and his team.”

Alex moved from eighth place to third with her runner up finish with one race remaining in the points chase. Heading into the PSCA Finals at Fontana on October 11th, Alex trails Matt Hardy by four rounds and Dick Krieger by three.